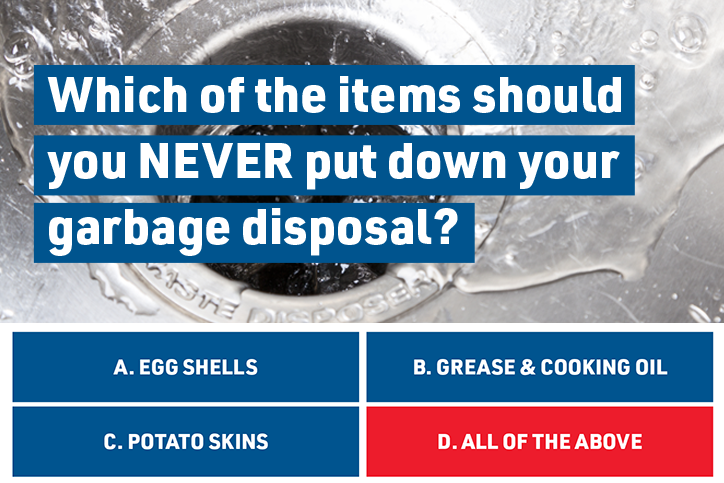 If you guessed D, all of the above...you're right! None of those items should be put down your garbage disposal.

Of all the people you expect to invite over during the holidays, your plumber probably isn’t one of them. However, holidays increase your likelihood of having plumbing problems like garbage disposal backups. The day after Thanksgiving is the busiest day of the year for plumbers, with calls jumping 50% compared to a typical Friday, according to Roto-Rooter, one of America’s largest plumbing companies.

The combination of more time spent in the kitchen, often cooking with unfamiliar recipes and ingredients, plus simply having more people in the house using toilets and showering can make pre-existing problems like partially clogged drains worse. All the extra use can overwhelm the system, causing it to fail at the worst possible time.

If you suspect there might be a problem brewing in your pipes, make a pre-emptive appointment with your plumber to ensure your garbage disposal, sinks, toilets and showers can handle holiday guests. Once you get the all-clear, here’s how to keep your garbage disposal running clog-free before, during and after the feast.

What foods should I never put down my garbage disposal?

“Virtually every traditional Thanksgiving dish is a drain-clogging culprit,” according to Roto-Rooter. Watch out for these:

What else can I do to prevent drain issues?

My garbage disposal smells bad! What should I do?

Residue buildup in garbage disposals can create odor. Check your owner’s manual or manufacturer’s website for tips on keeping your disposal fresh. And every two weeks, follow this gentle, ecofriendly cleaning routine:

RELATED: DIY maintenance to extend the life of appliances | PEMCO

Some DIYers recommend adding bleach to the disposal to clean and deodorize it; however, we discourage using bleach or other harsh chemicals that could fly out of the disposal if it’s turned on, potentially splashing you or food-preparation surfaces.

If you’re concerned that your appliances eventually will leave you on the hook for a big repair bill, consider getting warranty coverage. PEMCO has partnered with Cinch to help homeowners worry less and live more. It takes just minutes to get a quote online, and as a PEMCO member, you’ll get the first month of your Cinch plan free.

How can I make my refrigerator last longer? | PEMCO