It's something you already knew: Precipitation increases your risk of a car crash. An American Meteorological Society study says drivers are 34% more likely to have a fatal crash in wet conditions. It doesn't even take a downpour. Light precipitation boosted risk by 27%, although the heavier the precipitation, the higher the risk.

As you'd also expect, rain accounts for more precipitation-related crashes overall than snow, mostly because snow is less frequent in most parts of the country and many drivers simply opt out when the flakes fly. 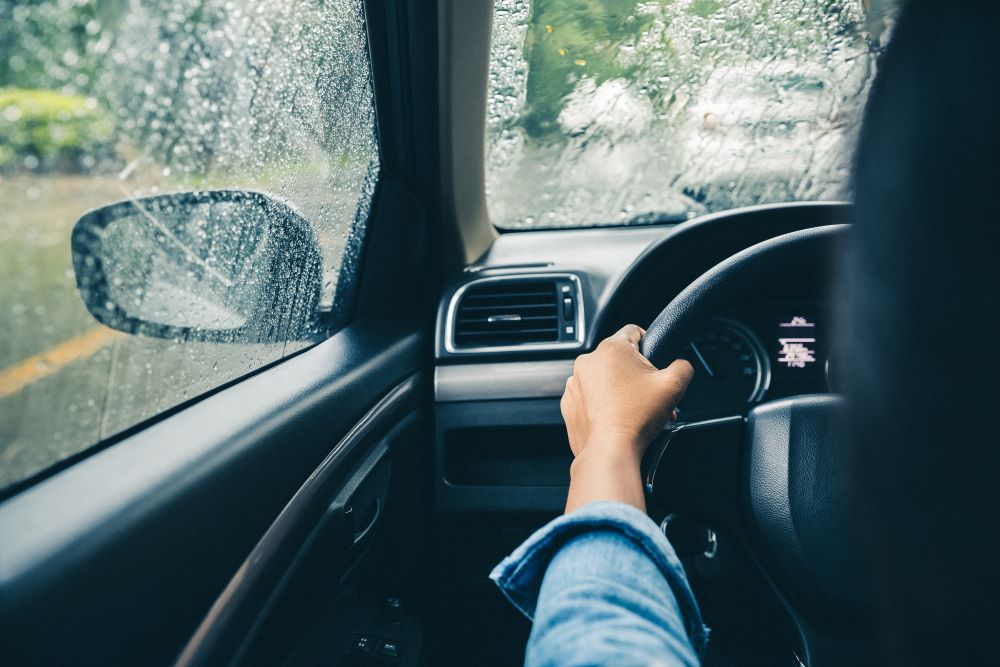 As we return to windshield-wiper season, here are 10 things you can do to stay safer when driving in the rain:

1. Slow down and increase your following distance.

Those are the two most important things you can do to improve safety in the rain, according to our claims adjusters, who investigate hundreds of crashes on rain-slick roads. Slower speeds reduce your risk of hydroplaning and give you more time to react and stop. Posted speed limits reflect optimal conditions, meaning you should slow down in anything less.

They're only good for about one year, and a streak-free view dramatically enhances safety, especially when it's both raining and dark.

3. Wipers on, headlights on.

While new wiper blades improve your ability to see, driving with your lights on improves other drivers' ability to see you. It's also the law to run with your lights on, regardless of the time of day, when visibility is reduced. If you've been following in a truck's spray, clean your headlights when you stop. A thick coating of grime can cut your headlights' effectiveness as much as 90%!

Put a quarter upside-down and facing you into the shallowest groove on your tires. If you can still see all of Washington's head, you have only 4/32-inch or less and it's time to consider tire shopping.

Your tires' tread displaces water on the road's surface. The deeper the tread, the more water your tires can move and the less likely you are to hydroplane (many new tires start out at 10/32-inch; 2/32 is considered bald). When the roadway is covered in 1/12-inch of water, your tires must displace one gallon per second to stay in contact with the road surface, according to AAA. Keep your tires inflated to manufacturer's specifications. Under-inflation causes treads to squeeze together, narrowing their channels and reducing your tires' ability to move water.

Their tires already have displaced some of the water, giving you a safer surface.

Many roads are crowned slightly in the middle to help with runoff. That makes the middle lanes less likely than the outer lanes to accumulate standing water. They also aren't as susceptible to standing water caused by a plugged drainage system.

There's a bit of controversy surrounding whether or not using cruise control in wet conditions increases your risk of losing traction, but at minimum, cruise control slows your ability to recognize and react to changes in road conditions. We say turn it off in rain as well as icy conditions.

8. Take extra care at intersections and on- and off-ramps.

Slower speed areas tend to accumulate more road oil and become slicker by comparison to other sections of pavement. The first downpour after a dry stretch is the most dangerous, as accumulated road oil loosens and coats the roadway before traffic has a chance to displace it.

Just 12 inches of water is enough to float a car. If you unexpectedly find yourself in standing water, keep your speed slow and steady, since a wave or splashed water can drown your engine. Once you're out, tap your brakes lightly several times to "dry" them.

10. Brake normally if you start to skid.

Pump the brakes (the advice you always used to hear) only if you're driving an older car that doesn't have antilock brakes.

Get your Auto + Home Insurance quote