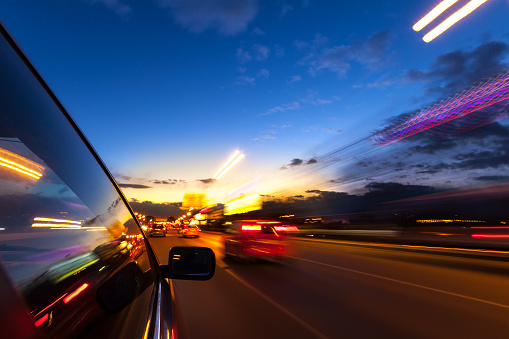 ​The idea of "passing on the right" makes many drivers uncomfortable, except maybe when overtaking another driver who is turning left. However, Washington and Oregon law does  permit passing on the right on multilane roads when it's safe to do so.

This question also applies to "left-lane camping" on the freeway and whether or not the HOV lane is considered the "fast" lane. In researching the question, we found that HOV drivers who want to go faster can pass another HOV driver by moving right. Those drivers would be subject to speed laws, the same as any other driver.

That said, the spirit of the HOV lane is to move large numbers of passengers as efficiently as possible. Traffic flow specialists encourage HOV drivers who want to drive slower than vehicles in the adjacent lanes (and notice they're being passed on the right) to move out of the HOV lane when it's safe and legal to do so in favor of a lane that's moving at their desired speed.

And that whole concept of a left "fast" lane? Actually a misnomer, according to police. It's more accurately called the "passing" lane, as in "keep right except to pass."

NOTE: While we're experts in loss prevention and home/auto safety, we don't consider ourselves experts in traffic laws or their enforcement. Information shared here is for educational purposes only and is not legal advice. If you have legal concerns, we urge you to contact a law enforcement source or attorney in your community.